When I saw this post by Shilpa sometime back about JaiHo concert and Rahman, I was taken back to memories when the time when I saw him live and then I went and saw the prompt for today at NaBloPoMo and guess what it is

What are the five best bands you’ve seen play live?

A coincidence? Must be God wanting me to write abt it 😉

Everything I do I do it for u….  What an awesome song that is… And just imagine the man himself, the awesome Bryan Adams singing it for you and to top it all if its the first concert you are going to together as a couple… Its bound to make it in the top 5 list… 😉 I have seen Bryan Adams live twice but the second time was truly divine with N and me holding hands and dancing oblivious to the world around us…. those were the days of early romance and courtship… to our defence most couple around us were behaving the same 😀  sigh those were the days, one of my mostest favorite concert ever

What happens when Zakir Hussain, John McLaughlin, Shankar Mahadevan and Shivmani come together… there is Shakti all around… The band was not truly fully shakti but it was the extended form and what evening that was… If I close my eyes and focus I can still almost hear the symphony that all of them created together… it was nothing less that a musical bonanza

Yeh Daulat bhi le lo, yeh shauhrat bhi le lo mujhko luata do bachpan ka sawan… anyone is his 30’s knows how damn true this is 😉 and almost everyone who knows me, knows how big a Jagjit Singh fan I am (atleast of what a great person he used to be till sometime back)… I have been lucky to seem him live 3 times but its the last time thats most special to me because I took mom along to probably her only concert of life… We bought the second best tickets (the best ones had got over by then) and made her sit in the third row right in front… I saw how much she enjoyed and my enjoyment almost doubled 😀

Comfortably Numb…. one of my most favorite numbers in the whole world…. And Pink Floyd a band I almost worship… I have every album of theirs right on my laptop and in my car and in my CD’s at home… so that if I want to hear them suddenly I always always always have access to them…. So when the band was coming to Bangalore how could I miss it ok to be more precise it was Roger Waters only that came but still it was electrifying to hear Just Another Brick in the wall playing right in front of you….

And that brings us to the man with whom we started the post the God of music himself…. the genius A R Rahman… I think it was 2 may be 3 yrs back when there was a Rahman concert happening in the city, for some stupid reason we ignored it last minute and in the last minute all we could get is the junta Rs 500 tickets and we were quite in number… a big gang of about 10 people I think and to make matters worst it rained like nobodys business that day… The concert as most other concerts in Bangalore was supposed to happen in Palace Grounds and everyone knows how slushy it becomes after a little rain… Very sad we reached there thinking may be the concert will be cancelled but it was on…. There was water all around…. But little did we know the rain will actually turn into our advantage that day… Only about 25% of the people who were supposed to turn up came… and the barricades for the higher value tickets were slowly opened and soon we found ourselves in the Rs 5000 stand… watching the legend himself face to face… Truly Jai Ho 😀

B is for Beatles, the revolution in music… Along with MJ I think it was beatles that rocked my growing up time… 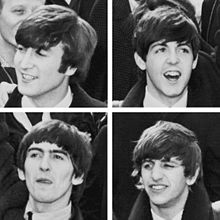 and while we are at hey jude have u guys seen this video, a kiddo singing hey jude… oh my god… adorable is the only thing I can say

Happiness is a warm gun, I just love this song… cant get enough of it… the lyrics are so deep that everytime u can twist and try and find another meaning to it..

Let it be… amazingly motivating

What are ur beatles favourite?

Some of bealtles trivia from wiki

The Beatles were a rock and pop group formed in Liverpool, England in 1960 who became one of the most commercially successful and critically acclaimed bands in the history of popular music. During their years of stardom, the band consisted of John Lennon (rhythm guitar, vocals), Paul McCartney (bass guitar, vocals), George Harrison (lead guitar, vocals) and Ringo Starr (drums, vocals), and were managed by Brian Epstein until his death in 1967.

The trademark in itself, everything I do I do it for u

The ever so romantic Have u ever really loved a woman

So what is ur favorite?

PS: I am having problem embedding videos today, have linked them will embed soon