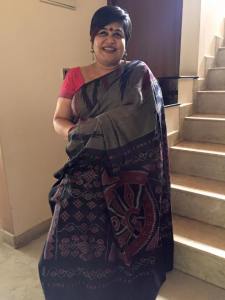 The word bindi comes from “bindu” which means a dot. The origin of Bindi is dated back to the mythological times and was traditionally sported by both men and women and was called “Visesakachhedya” that is painting the forehead for beautification purpose. The place of the bindi is of a great significance as well as it is supposed to channel the agni or the 6th chakra. This is the chakra which is said to control various levels of concentration attained through meditation. Tantric traditions also believe that this to be a potential point for the release of the latent energy in the human body.

Over time, the bindi transformed into a tilak for and more fancy cosmetic accessory for women. It also somehow managed to transform itself into one of the symbol of marriage along with sindoor, malipu and mangalsutra. Trust us to tie anything beautiful in a women’s body to her marriage and the man.

My relationship with a bindi has seen many ups and downs. At one point of time during college I used to wear those detailed hand painted bindis, remember those boxes of Shingar liquid bindis in all colors, there would be new designs we would discuss and would challenge each other for. I was in love with those bindis, so much so that my title at one of the farewells was “Teri Bindiya re” (gosh yes I am old, do they still do titles?). From there I moved on to those tall thin and lanky sticker bindis. I briefly flirted around with those stone and sequins bindis for functions but soon realised they were not meant for me. And then slowly as the outfits became more western and the attire more formal my affair with bindis, died a slow death.

But all through my love affair with Bindi, one thing I always shied away from was the big bengali style round bindi, always feeling it is not for my already gol gappa like face, and then Ritika Mittal happened in my life. I distinctly remember that day when I was walking into her second or may be third exhibition at Vermillion house wearing a MORA by Ritika creation, she and Melvin looked at me picked up big red bindi and put it on my forehead. There was nothing I could do about. But I also remember how I smiled to myself after that, how I wondered what took me so long and since that day till today saree equals big round bindi for me. Infact I have put it on many more people post that includingSwati Raman Garg, Pallavi Purani, Archana Doshi and loved how it looked on each of them, so here is to Bindi and awakening my 7th chakra 😉

PS: Have you guys checked out the #100sareepact. I am doing it and posting all my sarees and stories on the instagram account. Follow me there to get updates. Currently on the 63rd saree 😀