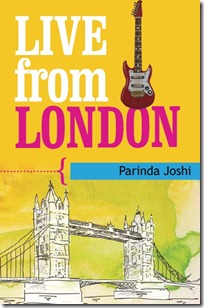 I love reading chicklits, and the first look of this book promised to be everything that a chicklit is supposed to be – a smart but slightly confused girl, a good looking hunk who might be her saviour, good friends, steamy romance, mushy feelings and to add to it London. I knew its a book that has to be read.

Live from London is primarily a story of Nishi Gupta, who came to live in London with her parents after her father got transferred, loves playing guitar and her bunch of friends Riya, Sarah and Zac. After finishing her education at a respectable college in London, she decides to play a risk with her career by wanting to join the music industry to prove the world that she has got it, to recover from the terrible hurt and embarrassment on her disastrous appearance in “Britain’s Got Talent”.

Against her Indian and conservative parents she sets out her struggle to make it somewhere with a cold and calculative boss but things turn around with the entry of America’s new pop star, Nick which predictably results in a steamy affair. Along with the love life, Nishi’s career begins to look good too with a song deal coming her way till the world decides to do a u-turn on her.

The book is a fast and easy read, written in a casual conversational language. I finished it in a single sitting during my Bangalore-Delhi flight. What I liked about the book was that it makes you realise that Parinda Joshi has promise for a better future, the characters were well formed and thought about. The book has it humor moments too, doesn’t drag around the story. Sticks to it and says is decently well

However inspite of all this, the book didn’t leave me fully satisfied. Why you ask? Couple of reasons and the top most being, like all Rupa books its not been copy read properly. It has grammatical errors and quite a few of them at that. And I have said that before, I can’t stand when that happens. For God’s sake there is some responsibility a publishing house has to take too.

The second reason that it left me wanting for more. I mean the book at times seemed hurried through, as if someone was under pressure to finish it for a deadline or as if short story has been forcibly converted to a novel.

But the book is surely a good addition to the fast emerging Indian Chicklits, books like this make me feel yes there is hope that may be just may be someday we will have an India Sophie Kinsella too?

Final Word : A fast and easy Indian chicklit with well defined characters. I would a good flight companion for people who like reading this genre.

This review is a part of the Book Reviews Program at BlogAdda.com. Participate now to get free books!

2 thoughts on “Book Review | Live From London by Parinda Joshi”