Continued from here and here

So we were at the beach around 5:45 or so, with the weather just perfect to play around…. we enjoyed and overcome our fears, much fun was had playing in water, sand, feeling the sand slip away under the feet and making castles 😀 all the while when it was drizzling a bit making it even more fun… sigh beach is the only thing that makes me feel damn jealous about chennai ;P

After spending around an hour and a half on the beach we all were hungry and the plan was to eat at Murugan Idly the place I start dreaming about the minute we start talking about a Chennai trip… We rushed to murugan idly only to be told that it opens at 8am for breakfast, disappointment is a small word for what I felt at that time I assure u 😦 however because I had one more day for eating that breakfast and we were hungry anyways P took us to hot chips, now that was a surprise as I didnt know that hot chips will sell idly dosa also. The hot chips here in Bangalore sell just what they are named for Hot chips and yummy ones too…. this hot chips had anything but chips 😉 the breakfast was decent though we thulped idly dosa, a dose of filter coffee and planned the rest of the day ahead while eating which was to proceed towards Mahabalipuram known as mahabs is what I am told 🙂

So after coming back home and scrubbing the sand away and making ourselves presentable we started on the drive towards mahabs on the ECR road of which I had heard so much about… and yet again all we encountered was crazy traffic, till quite sometime it did ease out when we crossed the toll booth a little though… the idea was to just decide if we want to stop somewhere on the way and see, if we dont find anything interesting we would head straight to mahabs, however the first stop came too soon – the snake and the crocodile park thinking ojas might enjoy the place… however it left me in pain just as most zoo’s in India too, apart from a couple of the like the Mysore zoo I always leave Indian zoos with a very heavy heart. This place was badly maintained, not clean at all, with tiny enclosures and the worst was the snake enclosure, they had placed the snakes in pots covered with a cloth, taken out randomly for display and nudged by a stick to fan so that the people there can get tips

Having said that ojas did enjoy seeing all the crocs, for him the state doesn’t matter too much as of now I guess. There were also some turtles in the glass enclosures which he loved the most. 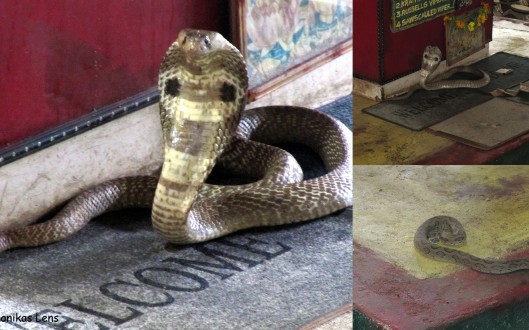 Inside the snake park

There were also some nice and cute turtles in park, which excited ojas the most…. he refused to get away from them 🙂 so after seeing this and indulging in some pineapple with a generous sprinkling of red chillies we headed straight towards mahabs enjoying the lovely view on both sides of ECR

PS: can’t believe I am writing so much about chennai 😛